We'll introduce the heart of React: components. This will include explaining why they're important and examining a few examples. If the idea and application of components don't click immediately, do not worry! The different moving parts required to understand how to use them will fall into place as we move forward.

There is no need to code-along with these examples, the purpose of this lesson is to demonstrate the functionality of React components.

Let's examine a high level overview of what a React component is before we implement one. The official React documentation on components says it best:

Components let you split the UI into independent, reusable pieces, and think about each piece in isolation.

Components modularize both functionality and presentation in our code. In order to understand how powerful this is, consider just how intricate web applications can become. The difficulty in logically arranging, architecting, and programming these web applications increases with their size. Components are like little packages: they help us keep everything organized and predictable while abstracting the 'boiler plate' code. Each component contains a snippet of code that describes what it should render to the DOM.

Enough of a description — let's see some examples! While the possibilities of what we can do with components are endless, the first thing we need to understand about them is the ways in which they act as code templates. Let's start simply and build up from there using a simple example.

Let's imagine we want to post a blog article describing why Bjarne Stroustrup has the perfect lecture oration. We also want our blog article to display comments made by readers.

First, let's make a component to showcase an opinion:

Take a moment to read that code line by line:

When React creates this element and adds it to the DOM, the resulting HTML will look just as you would expect:

Let's see what it would look like, were we to only render this one component, in the DOM:

Ok, that takes care of our Article part of our application. Now let's make a component to display a single user's comment:

Take the time to read that component line by line. Here is the HTML that this would create when added to the DOM:

In both of our examples, React is interpreting JavaScript code and spitting out plain old HTML that browsers will know how to represent to the user. While the code inside the return() statement looks like simple HTML, it's actually JSX: a specialized JavaScript syntax that resembles regular HTML. We will dive deeper into JSX (which is actually quite wonderful) later.

Once we have our components in hand, it's time to actually use them.

Step 2: use the components

Here we can see JSX coming into play a bit more. The code inside the return() still looks a lot like regular HTML, but in addition to rendering a regular old HTML div element we're also rendering our two components. We've created code that is not only well structured and modular, but also a straightforward description of what we want the App component to do: render the article first, followed by the comment. Here is what the resulting HTML will look like: 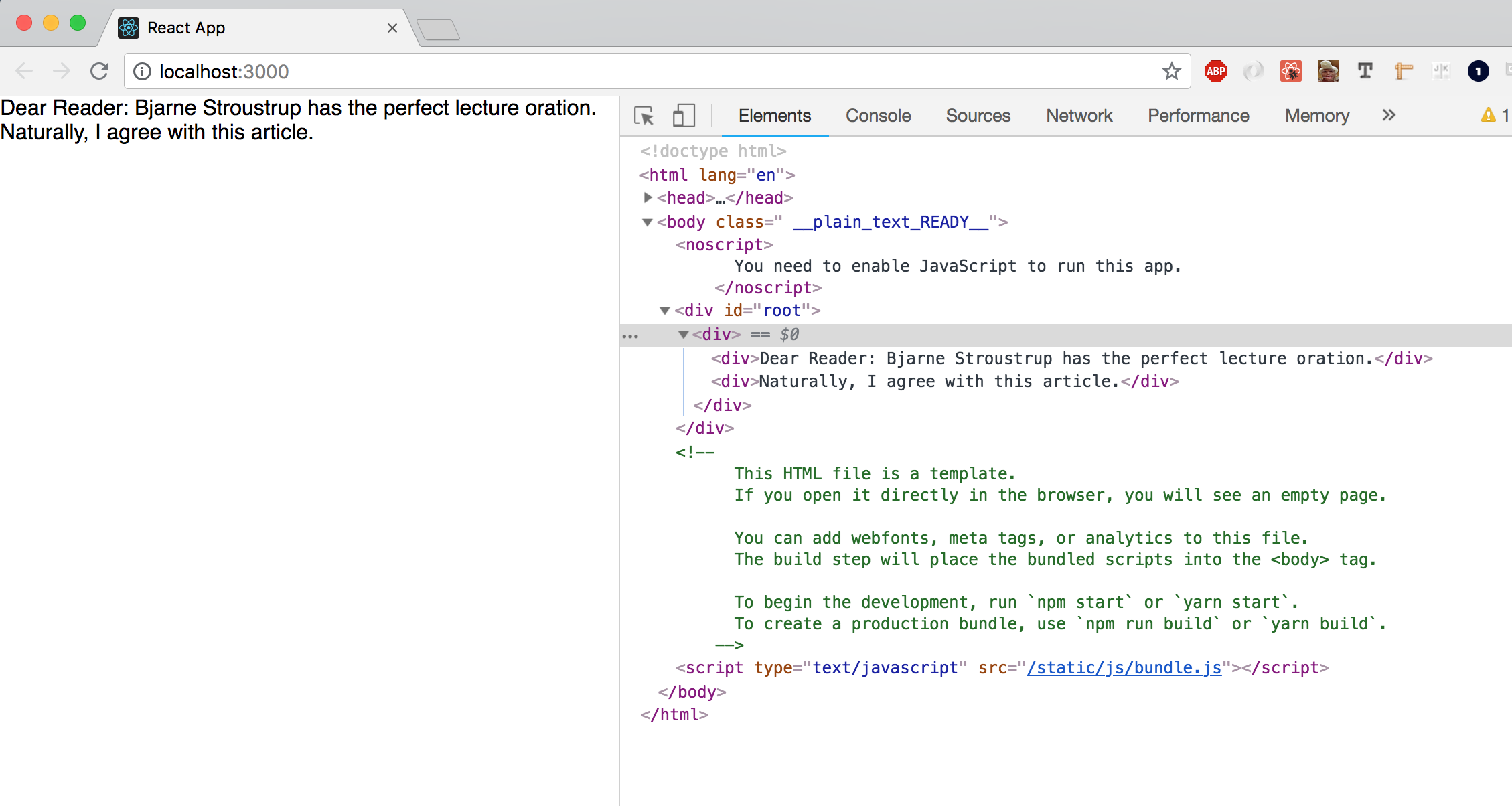 This unpacks logically. The App component (being our top level component) wraps around both Article and Comment, and we already know what they look like when they are turned into HTML.

We just introduced simplified, bare bones, React components. They are used to house modularized front end code. In our example, as is often the case, they contain information on how a portion of our application should be turned into HTML.

Going forward, we will continue with this example. We will show how components can be re-used and how they can be written as dynamic templates that contain content that can change based on user actions.