Rails is meant to be flexible. As a result, there are typically a number of ways to accomplish the same goals. Routes are a great example of how this principle operates in a Rails app. In this section, we will review how to leverage built-in URL helper methods instead of hard coding route paths into an application (along with why this is a good idea).

What's a real-world difference between using hard-coded paths compared with route helper methods? Let's imagine that you have a meeting in NYC, and you want to get from one side of the city to the other. You have a couple of different options:

Walking is like hard coding your route's path. Technically, it can work. However, it's slow, potentially error-prone (one small mistake can lead to the wrong part of town), and, if the meeting location changes, it will require quite a bit of manual work to adjust and walk to the new destination.

Taking a taxi is like using a route helper: you can simply provide the address to the driver and let them navigate the city streets for you. It is faster than walking, and, if the address for the meeting changes while you're en route, it's not as difficult or slow to adjust.

Don't worry if it's still a little fuzzy. Here's an example of what it looks like in code:

Here you're saying: "I know exactly the GPS coordinates of my meeting, driver. Do exactly as I say."

Here you're saying: "Can you find the best way to a controller that knows how to work with this thing called a Post based on looking at this instance called @post.

We want to use route helper methods as opposed to hard coding because:

To begin, we're going to start with an application that has the MVC set up for posts, with index and show actions currently in place. The route call looks like this:

This will create routing methods for posts that we can utilize in our views and controllers. Running rails routes in the terminal will give the following output:

These four columns tell us everything that we'll need to use the route helper methods. The breakdown is below:

One of the other nice things about utilizing route helper methods is that they create predictable names for the methods. Once you get into day-to-day Rails development, you will only need to run rails routes to find custom paths.

Let's imagine that you take over a legacy Rails application that was built with traditional routing conventions. If you see CRUD controllers for newsletters, students, sales, offers, and coupons, you don't have to look up the routes to know that you could call the index URLs for each resource below:

Our first three tests are currently passing; let's take a look at the lone failure. The failing test ensures that a link from the index page will point to that post's respective show page view template:

This matcher is currently failing since our index page doesn't link to the show page. To fix this, let's update the index page like so:

That is some bossy code. Let's use a link_to method to clean this up and get rid of multiple ERB calls on the same line.

This works and gets the tests passing, however, it can be refactored. Instead of hard-coding the path and using string interpolation, let's use post_path and pass in the post argument.

This is much better, but to be thorough, let's make one last refactor: Rails is smart enough to know that if you pass in the post object as an argument, it should use the ID attribute, so we'll use this implementation code:

If you run the tests now, you'll see that they're all still passing.

We're using the link_to method to automatically create an HTML a tag. If you open the browser and inspect the HTML element of the link, you would see the following: 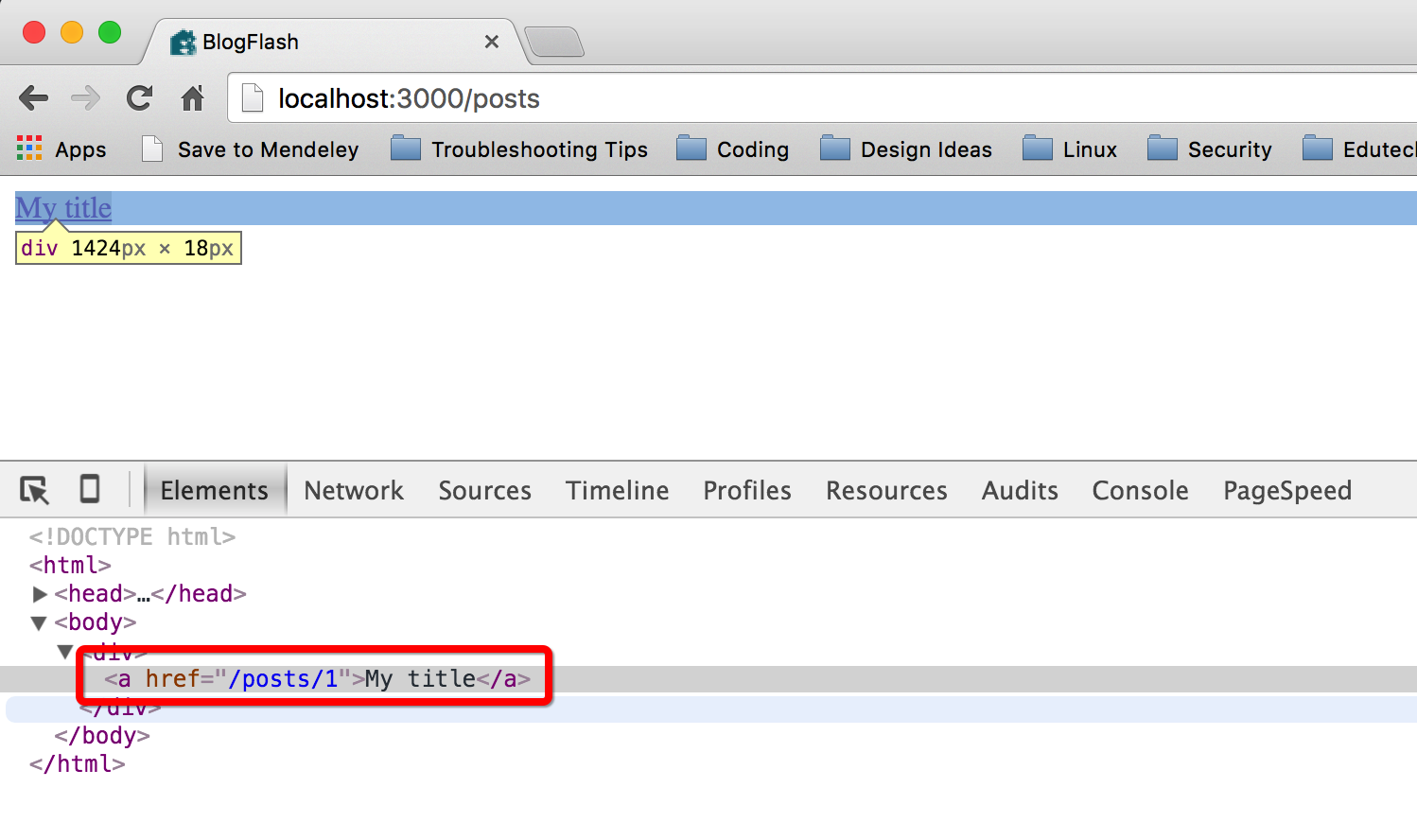 (If your browser loads a blank page, add Post.create(title: 'A lovely title', description: 'A superb description') to db/seeds.rb, run rake db:seed, and then restart your server.) As you can see, even though we never added HTML code for the link –– e.g., <a href="..."></a> –– the link_to method rendered the correct tag for us.)

Using the :as option

If for any reason you don't like the naming structure for the methods or paths, you can customize them quite easily. For example, let's say we were adding a feature to our site so that we could register a new user. We could start adding this functionality with the following route:

For all routes in our application, Rails generates a route prefix that we can use in our link helpers to generate the correct path. You can see the prefixes by running rails routes:

So to use our new GET /users/new route in a link helper, we'd use the users_new prefix:

We could make the path a bit easier to understand by using the :as option:

Now, running rails routes shows us the new prefix for this route:

Which means that we can use a more clearly named path in our link helper:

Rails leverages routes and these "helper route" names in many places to help you keep your code flexible and brief.

Hopefully, this lesson shed some light on the beauty of using route helper methods. If you run the tests again after making the above changes, you'll notice something interesting: all of the tests are still passing! If we had hardcoded the URLs in the links in our views, we would have had a major issue: all of our links to the show pages would have broken, along with our Capybara tests. However, by using the built-in helper methods, the links all updated automatically.