In 2000, Roy Thomas Fielding was frustrated by the haphazard ways in which web applications were using the HTTP standard. Specifically he was frustrated with how URLs and their corresponding HTTP verbs were used differently for every single application. So, in his PhD dissertation, he came up with REST (REpresentational State Transfer) as a standard way web apps should structure their URLs. His paper suggested a few other things, but we focus mostly on how it changed URLs. Fielding also noticed the rise in web applications communicating with each other. Using this standard way of forming URLs to access resources, Fielding hoped that inter-application communication would get much easier.

If you have been building applications for a while, there is a good chance that you have already worked with RESTful APIs. Integrating a Facebook login, having something in your application post to Twitter, pulling in a feed of images from Instagram, or even calling a list of locations from Google Maps are all examples of using a RESTful API to communicate between applications.

For a real world case study, let us pretend that you have a newsletter application. The following is a high-level view of how REST works in your app:

Rails has RESTful principles built into its core, so, whether you are utilizing the built-in view rendering system or using the application purely as an API, you will have the tools necessary to follow standardized routing procedures.

Let's take a look at a practical example of how this works. If we want to build out a newsletter feature, we would need the system to have four key actions – Create, Read, Update, and Destroy – commonly known as 'CRUD' actions. In addition to the CRUD actions, we will also need an index page that lists out all of our newsletters – that's our fifth route. Since our users will need to have a visual interface for creating and updating records (a form for creating and another form for updating), we will need two more routes. Putting all of that together, you will see that we end up needing seven different routes. The GET routes are all routes that usually render some erb content to a web browser. These are the routes that our users will work with everyday. The POST and PATCH are the url in the form action, and the DELETE is a new type of verb.

Here is a mapping of all of the different route helpers, HTTP verbs, paths, and controller action mappings for our newsletter feature.

Thankfully, Rails maps these specific things to specific methods or "actions" as they are called in Rails. If we had a controller called NewsletterController, we would define these seven methods and Rails will call them automatically based on the correct route. Below is a breakdown of each of the controller actions and what it represents. Notice the direct correlation between the route mapping above and the controller methods:

Here is a diagram that shows how the views, controller actions, routes, and HTTP verbs are all mapped together: 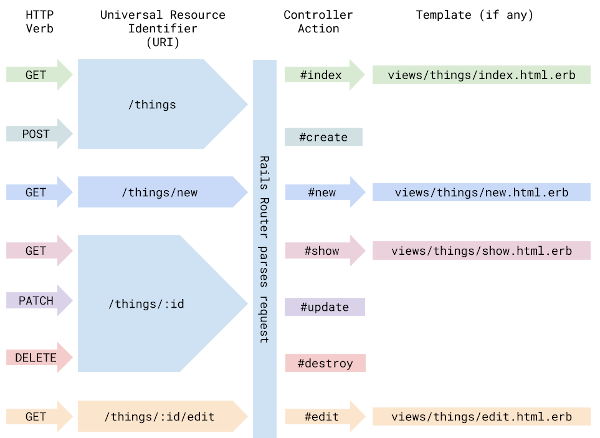 In analyzing the diagram, you can see the flow of data as follows:

So what do GET, POST, et al. represent? Those are HTTP verbs that each give the HTTP request unique behavior. Below is an explanation of each verb:

A Note on REST and Routing with Reference to Sinatra

If you've worked with Sinatra, you've seen how it's possible to declare an action's route(s) within the controller. Rails eschews this method of routing in favor of moving routes to a config file and treating them as RESTful by default. That's not to say that Sinatra applications cannot serve resources in a RESTful fashion — of course they can! — but Rails goes the additional step of making it difficult to do anything else.

You can (and should!) read more about Rails routing here.

Below are a few keys to remember when thinking about REST:

View Intro to Rest on Learn.co and start learning to code for free.