We're going to build a history site for New York City, so we're going to need to create the following database structure:

Our client has decided that the history app we're building them should have a special focus on historical figures. For this reason, it is through figure views and controllers that most of the magic of our app will happen. Our app will have view pages for all of the landmarks and a user will be able to create new landmarks.

However, when a user creates or edits a figure, they should also be able to select or create a new landmark and/or title to associate to that figure. In other words, the form for a new figure and the form to edit a figure should allow the user to select from existing landmarks and title and create new landmarks and titles to associate to the figure. Our client doesn't really care about titles, on the other hand, and we won't be required to build a titles controller or to have any titles views. New titles will only get created in the context of creating or editing a figure.

Use the tests to guide you through building your controllers and views.

Below is an example of a join table. We called it figure_titles and you should do the same for this lab.

Now, use the has_many, belongs_to and has_many, :through macros to set up the correct associations in your models:

Top-Tip: Type tux in your terminal in the directory of this project in order to drop into an interactive Ruby console that is connected to your models and database. Here, you can play around with creating and associating instances of the classes you create once you properly set up the above. This is a helpful way to solidify your understanding of the relationships between your models before you go into building the routes, views and forms that will allows your users to interact with them. Start out by creating a new figure, landmark and title. Then, add that landmark and title to the figures collection of landmarks and titles respectively. Keep playing around from there however you like.

Make sure to migrate your test database by running rake db:migrate SINATRA_ENV=test

After your Active Record models have been properly defined, you can load the seed data by running rake db:seed.

You should create a Landmarks Controller and a Figures Controller. This lab is test-driven; it may be possible to create an app that behaves as expected but will not pass the specific tests. Use these tests to determine how to structure your forms (in particular, the names assigned to specific inputs).

Your forms will need to be complex. Your form for a new figure should dynamically generate checkboxes out of the available landmarks and titles. It should also have fields for creating a new landmark and/or a new title. The controller action that catches the POST request sent by submitting this form should account for this. The same is true of your form for editing a given figure. Read the tests very carefully to understand how you should set up your forms.

Here's a sample form you can use for reference: 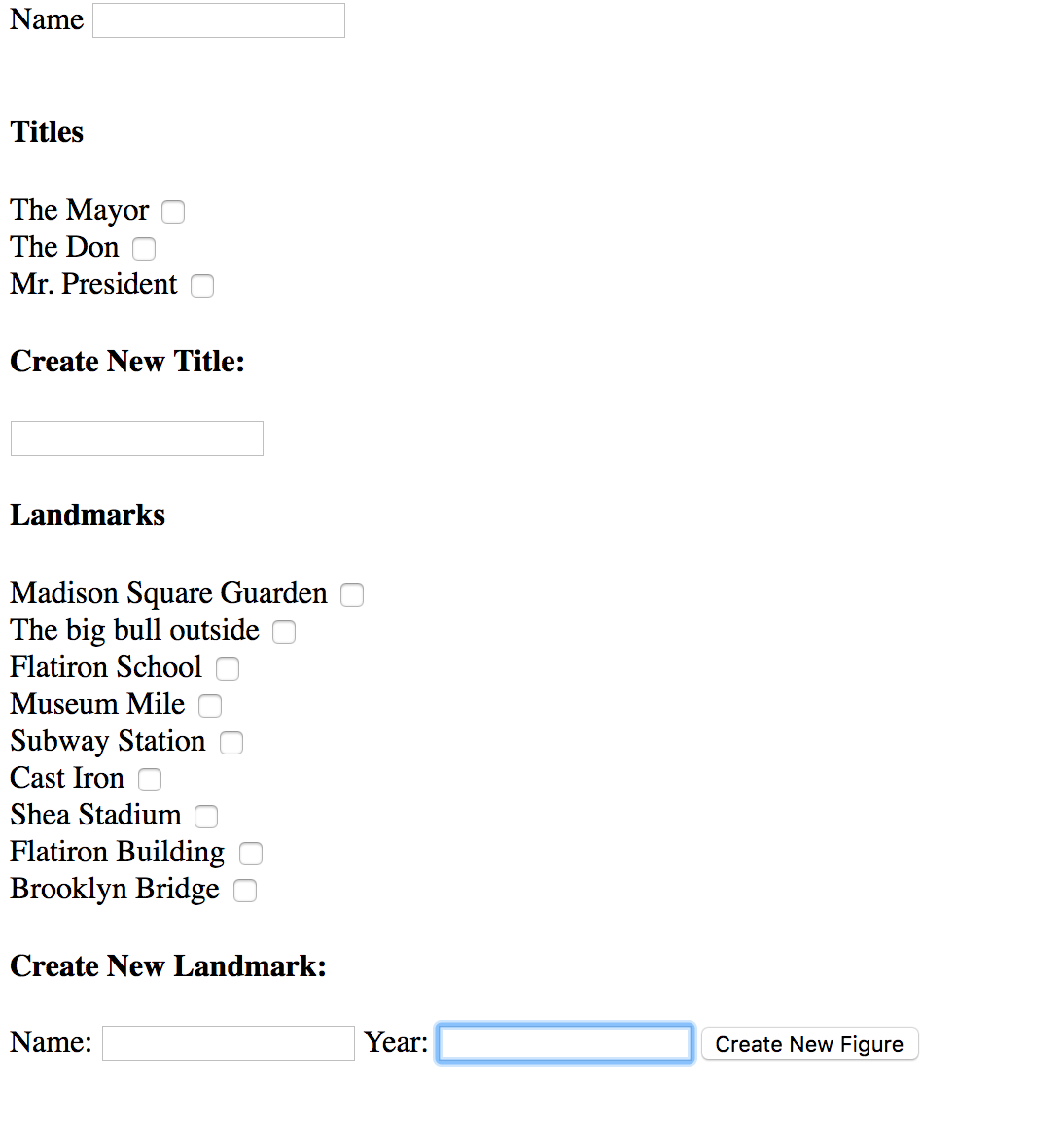