How Do I Get Set up on Learn?

To sign up for Learn, click the "Try a Free Intro Course" button at the top of this page. You can also go to Flatiron School and browse all of our courses.

An IDE is an integrated development environment and this is where you're going to be completing coding labs in Learn. Let's take a few minutes and talk a little more about it and how it works.

The Learn IDE is built on top of Atom, the text editor by the amazing people at GitHub. The Learn IDE uses the same open-source technologies that thousands of professional developers use everyday, so when you're using the Learn IDE, you're using the same real tools that developers use. Because it's built on top of Atom, it's also compatible with the entire Atom plugin infrastructure giving you access to all kinds of useful extensions and tools you can add on as you see fit.

When you open the Learn IDE, you'll see 3 main components: the file browser, the text editor and the terminal. Let's talk about each of those. 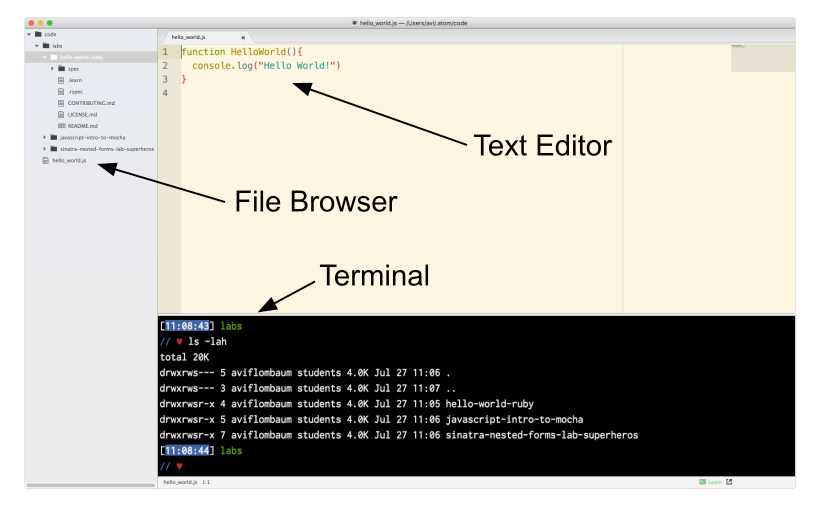 Down the left side of the IDE, you'll find a file browser which lists the files and folders in your “code” workspace. Contained in your “code” workspace is a “labs” folder—this is the folder into which all of the code labs and projects you'll be working on will appear. You'll see new folders be automatically copied here for you as you start working through lessons on Learn very soon. Clicking on a file in the file browser will load the contents of that file into the text editor window.

The text editor window is the central part of the IDE. This is where you'll actually be writing code. You'll write code here either by editing existing files in the project folders that are copied into the IDE or by creating new files when necessary. You can work on multiple files at once in the text editor, they'll appear as tabs across the top of your screen. Remember to save your work often—especially just before trying to run a program, so that the interpreter is always running the latest version of your code.

The Learn IDE's terminal—your command line and shell—can be found below the text editor. If you were using a local terminal on your computer, you'd need to spend a bunch of time installing several different tools and packages to allow you to start compiling and running code; it can be a cumbersome and complex process. But because we want you to start coding as quickly as possible in the Learn IDE, we've pre-configured the terminal here with a complete development environment that has everything you need to get started. The magic that makes this possible is the fact that the Learn IDE's terminal is connected over the Internet to a remote server we've set up with a complete development environment for you. This will allow you to adopt the workflow of a professional software developer right out of the gates on Learn, with no fuss.

When you get set up for Learn you'll be prompted to download the IDE during the process.

What If I'm Set up on Learn but don't have the IDE?

Go to learn.co/ide and follow the steps from there.

View Setup on Learn.co and start learning to code for free.