Nested scopes and the scope chain

When we invoke firstFunc(), the first line of code inside the function, const firstVar = 2;, runs first, creating a new local variable. When the JavaScript engine reaches the function's second line, it sees the reference to firstVar and says, "Great, I know what that means: it's a local variable!" Then, the engine encounters the reference to globalVar and says, "What the heck is this?! That's not declared locally!"

Top Tip: What matters for the scope chain is where the function is declared — not where it is invoked.

We can think of JavaScript scopes as a nested system: 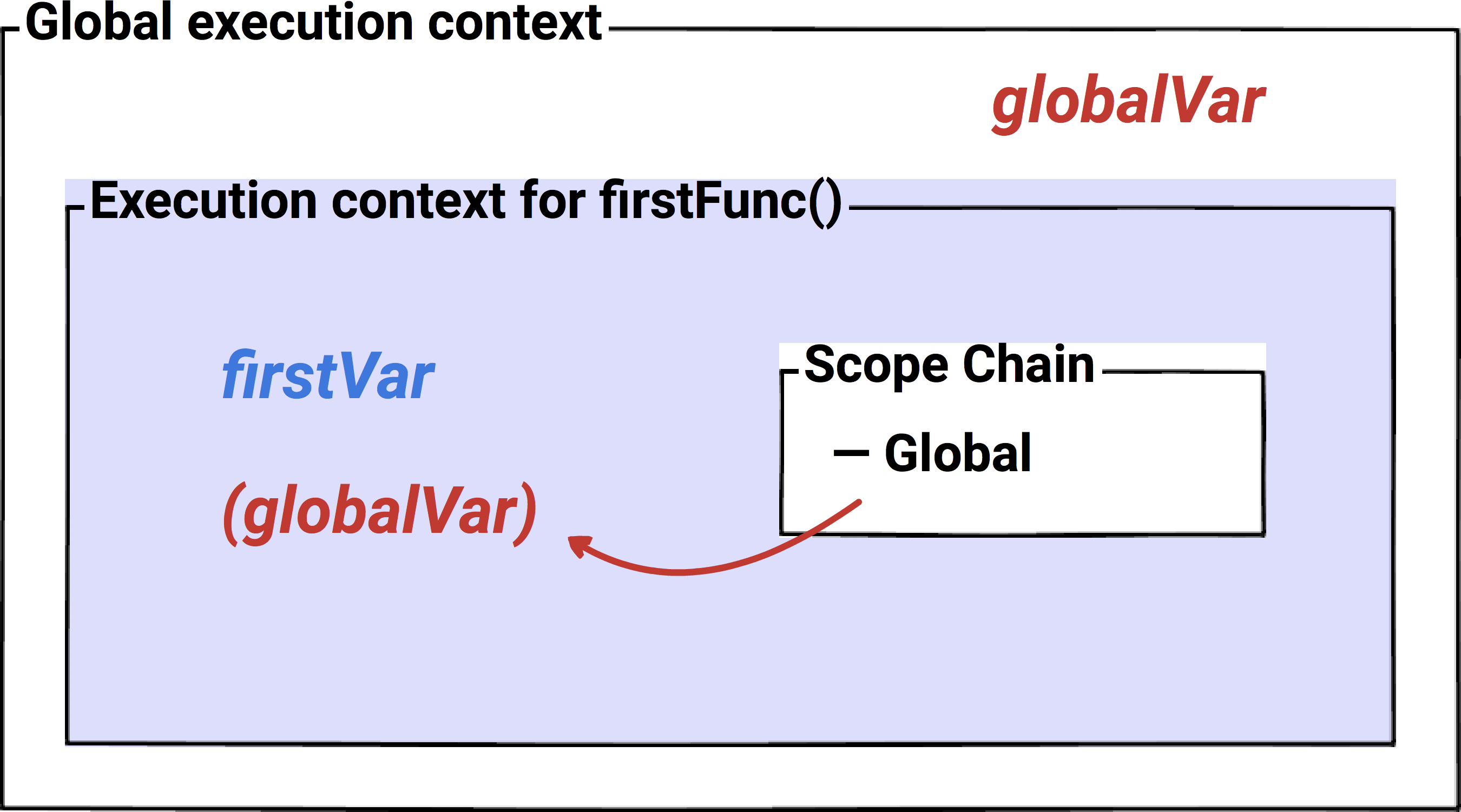 Inside firstFunc(), we've defined a second function, secondFunc(). That second function creates yet another scope, and in it we can reference firstVar and globalVar via the scope chain: 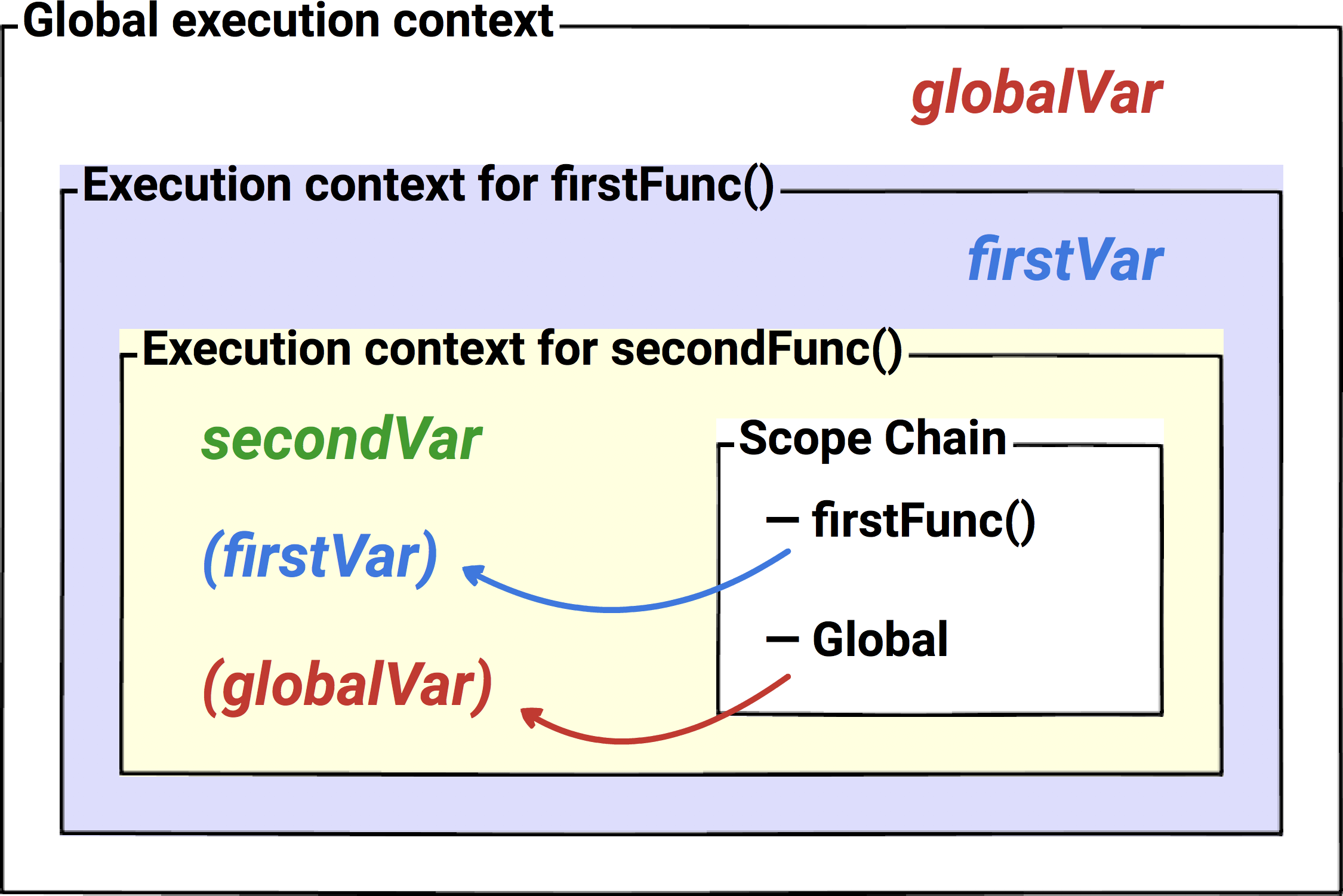 Okay, we have an idea of what the scope chain is, but how does it actually work under the hood?

The JavaScript engine and identifier resolution

As a brief refresher, when we declare a variable or a function, we provide a name that allows us to refer back to it:

We call those names identifiers because they allow us to identify the variable or function we're referring to.

When our JavaScript code is run in the browser, the JavaScript engine actually makes two separate passes over our code:

The first pass is the compilation phase, in which the engine steps through our code line-by-line:

The second pass is the execution phase. The JavaScript engine again steps through our code line-by-line, but this time it actually runs our code, assigning values to variables and invoking functions.

One of the engine's tasks is the process of matching identifiers to the corresponding values stored in memory. Let's walk through the following code:

During the compilation phase, a reference to the identifier myVar is stored in memory. The variable isn't yet assigned a value, and the second line (myVar;) is skipped over entirely because it isn't a declaration.

During the execution phase, the value 42 is assigned to myVar. When the engine reaches the second line, it sees the identifier myVar and resolves it to a value through a process known as identifier resolution. The engine first checks the current scope to see if myVar has been declared in it. If it finds no declaration for myVar in the current scope, the engine then starts moving up the scope chain, checking the parent scope and then the parent scope's parent scope and so on until it finds a matching declared identifier or reaches the global scope. If the engine traverses all the way up to the global scope and still can't find a match, it will throw a ReferenceError and inform you that the identifier is not declared anywhere in the scope chain.

Let's look at an example. Remember, the engine will continue to move up the scope chain only if it can't find a matching identifier in the current scope. Because of this, we can actually use the same identifier to declare variables or functions in multiple scopes:

During the compilation phase, a reference to myVar is created in the global scope, and a reference to a different myVar is created in myFunc()'s scope. The global myVar exists in the scope chain for myFunc(), but the engine never makes it that far. The engine finds a matching reference within myFunc(), and it resolves the myVar identifier to 9001 without having to traverse up the scope chain.

This topic might feel a bit esoteric, but it's critical to understanding how identifier lookups happen in JavaScript. That is, when the JavaScript engine encounters a variable or function, how it knows what value or function to retrieve from memory. If the engine finds the identifier declared locally, it uses that value. However, if it doesn't find a local match, it then looks up (or down, depending on your perspective) the scope chain until it either finds a match in an outer scope or throws an Uncaught ReferenceError.