In this lesson, we'll learn how JavaScript decides which outer scope to place into the scope chain for a new function.

First, a brief note. Some of the material introduced in this section might feel a bit confusing or esoteric, but, fear not, you're going to get more and more comfortable with these concepts throughout this course. If you're finding it difficult to wrap your brain around some of these more abstract concepts at this point, don't freak out. This is really difficult material that even seasoned programmers occasionally struggle with. After you've read the material and given it a college try, feel free to move on to the next lesson — with a mental note to return once you have more JavaScript experience under your belt. Okay, onwards and upwards!

Take a look at the following code snippet:

Think about what we've learned in previous lessons about how JavaScript looks up the scope chain to perform identifier resolution. Given that information, what do you think will get logged out to the console when we invoke second()? Let's try it out:

Did that catch you by surprise? At first glance, it might seem like Bar should get printed out. Inside second(), that string is assigned to the myVar variable right before first() is invoked:

However, the assignment of myVar as 'Bar' is not visible to first(). This is because second() is not the parent scope of first(). 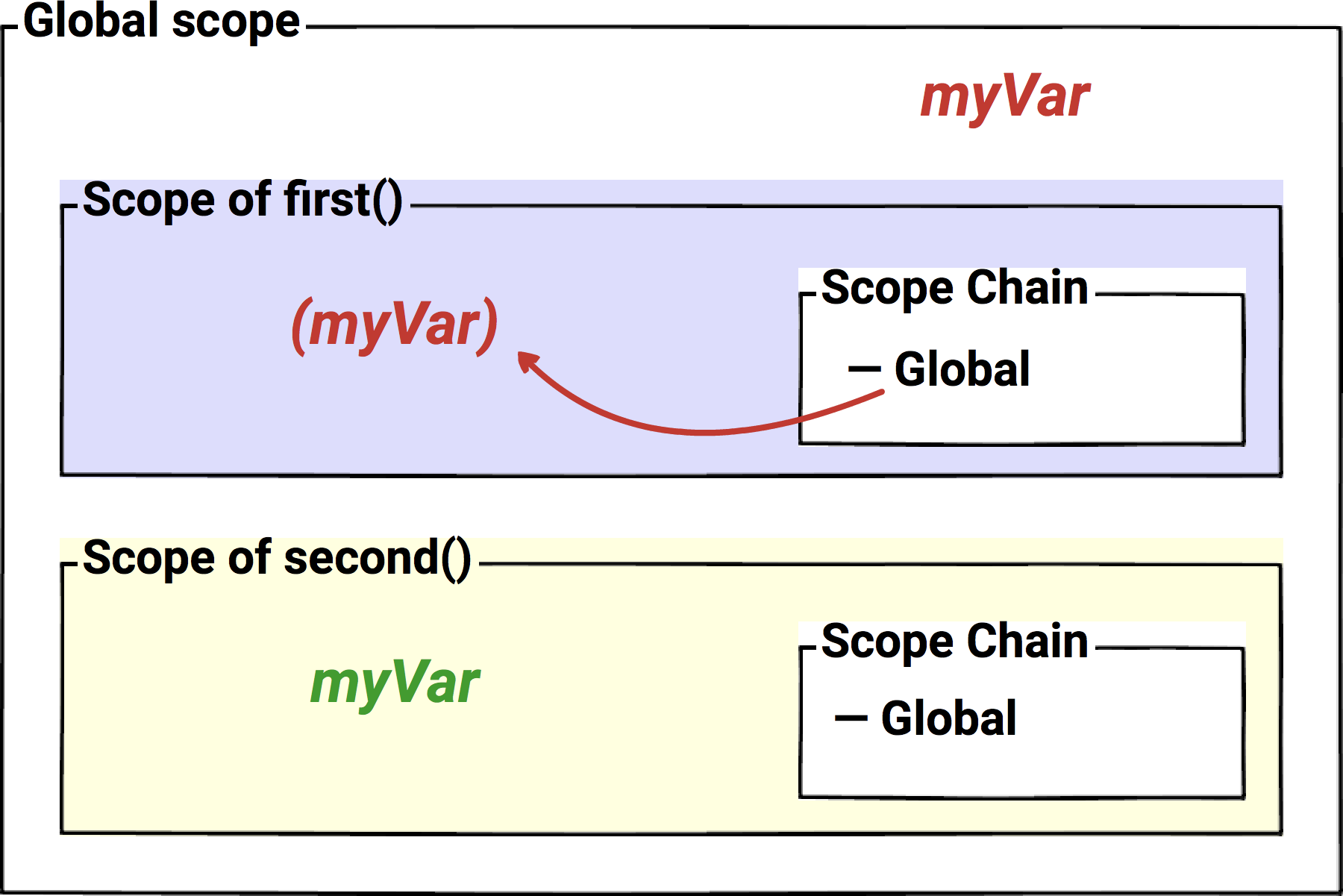 No variable named myVar exists inside first(). When the JavaScript engine reaches the second line of code inside the function, it has to consult the scope chain to figure out what the heck this myVar thing is:

The engine's first (and only) stop in the scope chain is the global scope, where it finds a variable named myVar. The reference to myVar inside first() is pointed at that external variable, so console.log() prints out myVar is currently equal to: Foo.

first() is declared in the global scope, and, when it comes to the scope chain, JavaScript functions don't care where they are invoked. The only thing that matters is where they are declared. When we declare a new function, the function asks, "Where was I created?" The answer to that question is the outer environment (the outer scope) that gets stored in the new function's scope chain.

This is called lexical scoping, and lexical environment is a synonym for scope that you might encounter in advanced JavaScript materials. Lexical means "having to do with words," and for lexical scoping what counts is where we, the programmer, typed out the function declaration within our code.

In the example above, we typed out our declaration for first() in the global scope. If we instead declare first() inside second(), then first()'s reference to its outer scope points at second() instead of at the global scope:

When we invoke second() this time, it creates a local myVar variable set to 'Bar'. Then, it invokes first():

While first() is executing, it again encounters the reference to myVar and realizes it doesn't have a local variable or function with that name. first() looks up the scope chain again, but this time first()'s outer scope isn't the global scope. It's the scope of second() because first() was declared inside second(). So first() uses the version of the myVar variable from the second() scope, which contains the string 'Bar'.

If this isn't making a ton of sense, don't sweat it too much! We're spending time on things like the scope chain and the lexical environment now because they're fundamental to the language, but they are not easy concepts to grasp! Keep these concepts in mind as you move through the rest of the course. As you write more and more JavaScript code, you'll notice some of the language's eccentricities cropping up. But then you'll remember things like lexical scoping and the scope chain, and you'll be in a much better position to explain what's going on — why your code is being interpreted a certain way.

Investing the time and effort now will pay huge dividends throughout your JavaScript programming career. Knowing how to declare and invoke a function is great and necessary, but knowing what's actually going on under the hood during the declaration and invocation is exponentially more powerful.

When a variable contains an unexpected value, understanding the scope chain will save you countless hours of painful debugging. When you're wondering where to declare a function so that it can access the proper variables, your familiarity with JavaScript's lexical scoping will save the day. When you want to impress some new friends at a party, hit 'em with a quick lesson on how running JavaScript code consists of distinct compilation and execution phases.