Welcome to the JavaScript functions lab! You'll notice a few new things in this lesson that we haven't encountered before. Don't worry, we'll walk you through them.

Even if you've walked through some of this material before, it's a good idea to review as we code-along — we're writing functions now, after all.

For now, open up index.js in your text editor. You should see, well, nothing. We'll fix that soon.

Now open up test/root.js. Hey, there's something! What's all of this stuff doing?

At the very top of the file, you'll see

This might be a bit bewildering, but all we're doing is referencing different libraries that help us run your tests. A library is code that someone else (usually multiple someone elses) wrote for our use. Note that require won't work out of the box in the browser. We're actually running our tests in a different environment.

If you go to test/index-test.js, you'll see

describe is a function provided by our test runner (in this case, we're using Mocha) — it's basically a container for our tests.

Let's take a closer look at that describe():

These internal describe() calls are used for describing the functions that you're going to write. In this case, the test is saying, "Okay, I think there's going to be a function called shout, and it should take one argument (it doesn't actually matter what the argument is called, but string, is nice and specific, don't you think?). It should return that argument in all caps.

which says that it expects a call to shout() with the string 'hello' will equal the string 'HELLO'. This is the actual test — otherwise called a spec, expectation, or assertion — for this function. We can have more than one test per function, but let's start with this one.

To run the tests, run learn test in the terminal in your Learn IDE. The first output you'll see will look like 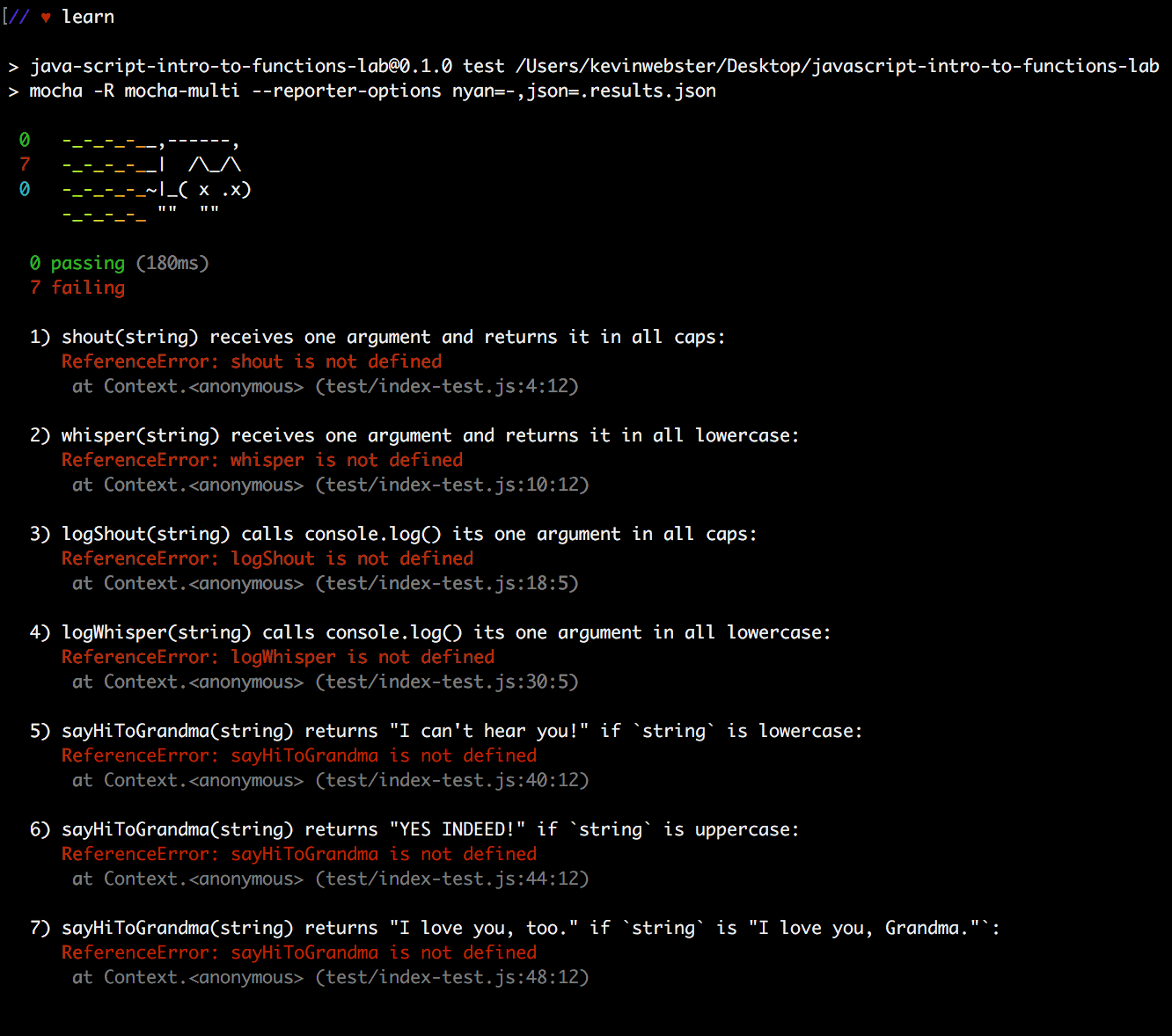 Hm, that's kind of disappointing. Let's see if we can get that first test to pass. Open up index.js.

When we write our code, we follow the guidance of the tests. Remember the line, describe('shout(string)', () => { ... }). Well, we know that we need a function called shout that accepts an argument — let's add that first. In index.js:

And what should that function do? Well, the it() description tells us that it "receives one argument and returns it in all caps".

Okay, so with that information, we know that our function should look like

But how do we make string all caps? JavaScript has a method for that! It's called toUpperCase(). We can call it on any string:

So let's try it with our shout() function:

And run our tests again: 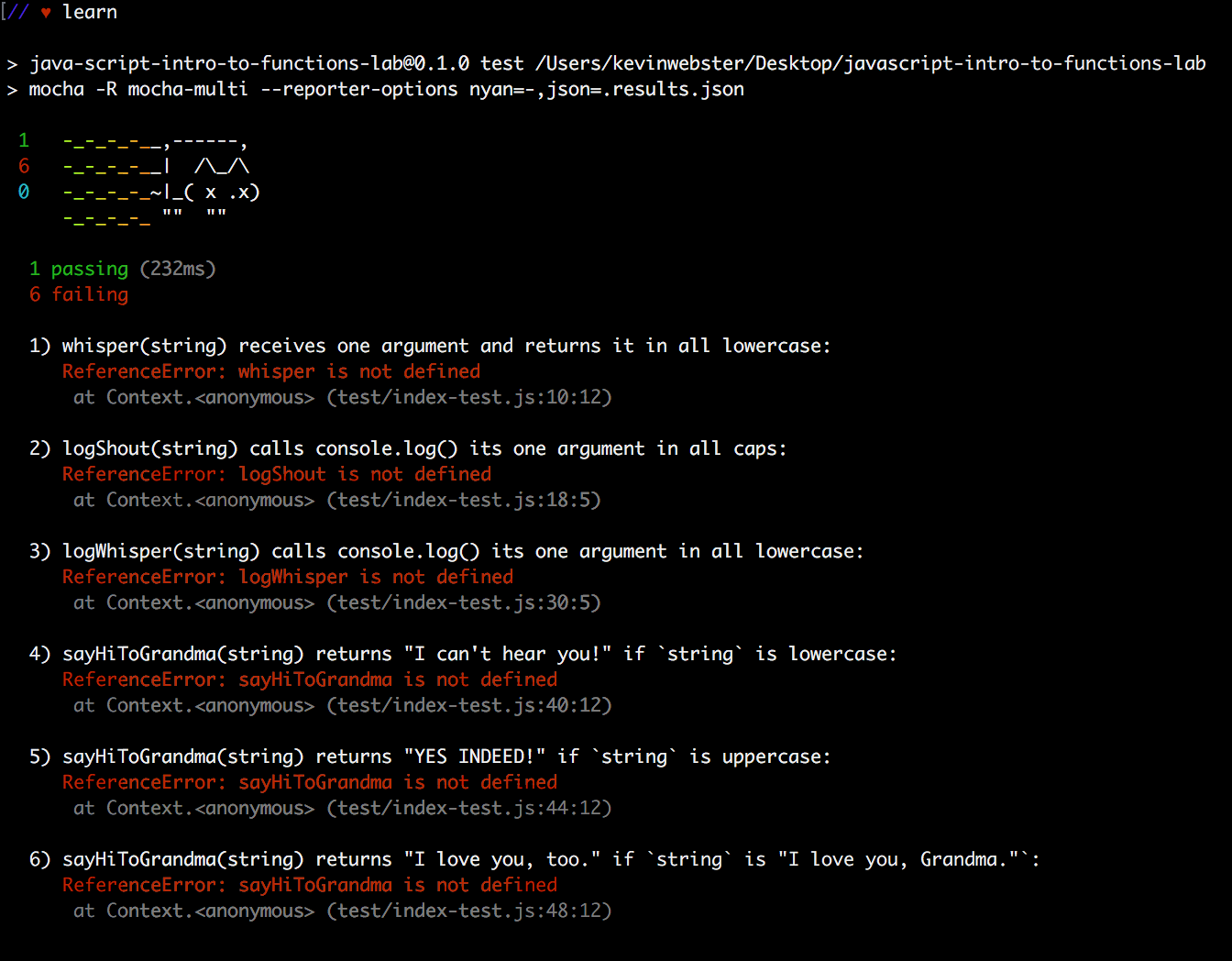 Hey! We got one to pass!

Now it's your turn to get the rest of the tests to pass. Note that some of them require you to use console.log() instead of return — follow the guidance of the tests!

In this lab, we're writing functions that "speak" at different volumes — they whisper or they shout. We're going to use what we learn practicing speaking in this way to write another function, sayHiToGrandma(), which takes our new-found speaking ability to greet our grandmother. She's not exactly deaf, but whispering can be a bit difficult. But she'll always hear you if you say, "I love you, Grandma."

Additionally, how do we check if a string is all lowercase or all uppercase?

We can simply check whether the string is the same when we convert it to uppercase or lowercase! (The lines with the === comparisons are the ones that check). If it's the same, then it was already in that case; if not, then it's either in the other case or it's mixed case.

Good luck! When you're finished, be sure to run learn submit!

View Intro to Functions Lab on Learn.co and start learning to code for free.